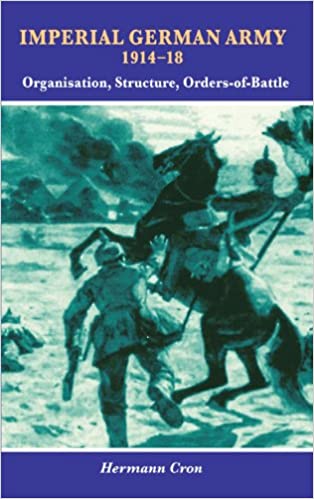 The shock was palpable.  Having read the dry, technical, and very informative description of the order of battle of the Imperial German Army (Cron, Hermann; Rogers, Duncan. Imperial German Army 1914-18, Helion and Company. Kindle Edition.), 1 the author’s conclusion was somewhat more opinionated.  It began:

Whatever the reasons may have been for concluding the ‘shameful’ armistice, it is certain that the German Field Army left the enemy countries undefeated, and completed the march back to their homeland in full order. Then, of course, prompted by a ‘cowardly’ Government, unsure of itself, there followed an over hasty process of discharge, so that only the officers involved in winding-up were left.

There followed an extended quotation from the lyrical order announcing, as of September 30, 1919, the dissolution of “the old Prussian army,” which the order described as “the Volk in arms,” and the formation in its place of the new Reichswehr.  The order concluded:

Deeply moving is such a retrospect over the last hour of farewell of the old Army. But we should not be worthy of what has been proudly handed down to us if we were to mourn without deeds. The great German Fatherland needs every man, every force, it needs the spirit of duty and dedication up to the point of self-sacrifice. In fostering it we see the sacred legacy of the ‘old’ Prussian Army. We wish to preserve it loyally in our hearts and wish, from this root, to draw forth the power to work for the reconstruction of our beloved Fatherland. Per aspera ad astra!

The author then concluded with an encomium for Adolph Hitler, “a ‘leader of genius’, whose boundless energy, on 16 March 1935 in place of the weak Reichswehr, set a new German Volkswehr.”

The publishers’ note, included with the text, explains that the conclusion, written in 1937, was retained for completeness and admonishes that its retention does not indicate that the publishers share the sentiments or opinions of the author.

While I would question the publishers’ assertion, included as an explanation for retaining the conclusion—that the pro-Nazi tendencies are those one would expect of a military writer at the time or that “it thus gives the reader a clear insight into the opinion of many veterans of the First World War German Army”— the publishers’ decision was correct.  The conclusion is an ugly wart that easily could have been airbrushed out of existence.  The conclusion bears no relationship to the tone or content of what precedes it, and eliminating it would (I admit) have improved my appreciation for the author.  His work is factual, and the expression of the author’s political opinions in a coda does not diminish the fact of the text’s factualness.

But to do so would have corrupted the historical record.  The contemplation of the past is not complete if it reflects only upon that which we find sublime.