This week, I have some more good news to share. Campaign for the Confederate Coast was reviewed on the the Civil War Books and Authors website. You can access the review here: https://cwba.blogspot.com/2021/07/review-campaign-for-confederate-coast.html.

Photographs of active combat do not exist for the Civil War period because, in general, the exposures that were required to record an image were so long that anything moving before the lens of the camera either blurred or failed to register at all.  Photographs of busy city streets, for example, show them as ghost towns, with a cart and a horse standing still, one or two loiterers on the sidewalk, often blurred, and the streets appearing otherwise empty.  There were exceptions.  In 1859 Anthony Edwards published a stereograph entitled “Broadway on a Rainy Day” showing with exceptional clarity people and vehicles moving in New York City.

Civil War photographs abound, but they show the aftermath of battles, officers in conference, staged portraits and still shots of the implements of war.  There is an exception that appears to show action.  This photograph, entitled "Unidentified Camp Scene", taken by Philip Hass and Washington Peale, is one of many from the Civil War era in the Library of Congress.  The photograph shows a group of soldiers, standing along a beach in the near distance looking at something in the farther distance that is happening on the water.  Army tents occupy a sandy rise above the beach to the left side of the image, and out across the water on the left side of the image is the profile of a ship on the horizon with a billow of smoke rising away from it to the left, suggesting that it had recently fired its guns in that direction.  In among and beyond the heads of the soldier on the beach there appear several small dark bumps on the horizon.

Enlarged, the image shows five monitors, seen as dark profiles against the light cloudy or smoky sky.  The hulls of the monitors are but only slightly above the water.  Prominent on each hull is the squarish rectangle of the turret with pilothouse the smaller squarish rectangle on top of the turret.  Behind each turret a smokestack appears as a narrow rectangle.  Unlike the original Monitor, which removed its smokestack during combat, the Passaic-class monitors had permanent smokestacks mounted behind their turrets.  In the photograph, the smokestacks rise to the left of the turrets, which suggests that the monitors are heading to the right, away from the beach. 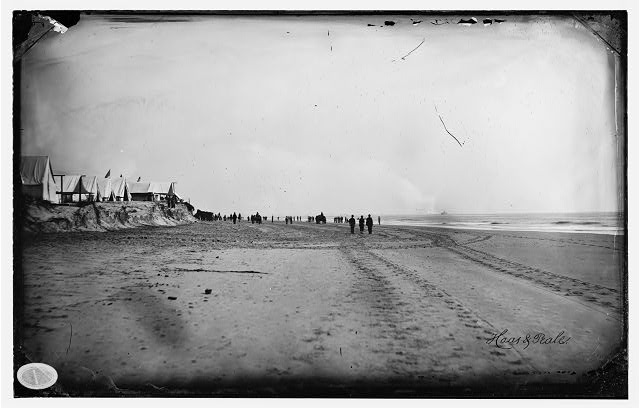 I first saw these images in a book entitled Charleston at War: The Photographic Record 1860-1865 by Jack Thomson (2001).  He stated that the date of the image was September 8, 1863.  He surmised from the photographic evidence that the monitors were heading east, having expended their ammunition in their attack.  The Library of Congress records say the photograph dates from July or August 1863.  When I asked the Library staff whether they had any information supporting the September date, they said they did not.  Earlier this year I checked back with the Library of Congress records, which now states:

These ghostly images in the old photograph tantalize us with the suggestion of other sights, sounds, smells and sensations – the sight of the crews of these ships, working their machines and guns to prosecute the business of war, the roar of guns firing and the rumble of the iron machinery turning within the creaking vessels built of iron and wood, the sulfurous smell of the gunpowder smoke, the acrid aroma of the coal burning in the fireboxes and musty odor of the damp steam vented from the various engines and boilers and the constant heat.  The men serving below decks on the monitors, however, did not have any sights, sounds, or smells of the sea.