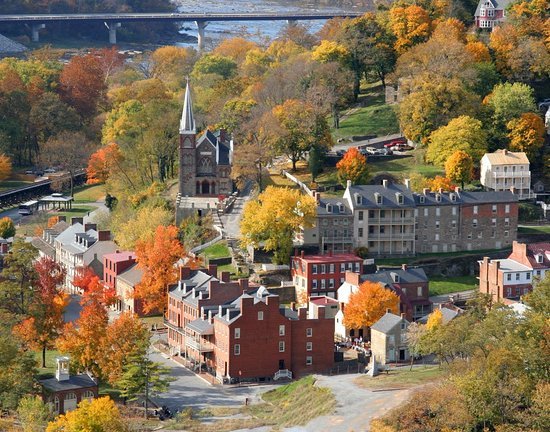 The Ranger greeted the two dozen visitors who had shown up for the two o’clock tour.  When he had their attention, he began.

"The beauty of this place is compelling, with large green trees, the Shenandoah River behind me flowing into the Potomac River, and the Loudon Heights and Maryland Heights towering above.  In 1860 the picture is somewhat different.  Look anywhere around you and imagine a building, you are probably right.  The availability of large amounts of water power made Harpers Ferry a major industrial center.  Factories lined the banks of both rivers.  Rivers, railroads and canals running through Harpers Ferry made it a major crossroads as well.  The Baltimore and Ohio Railroad ran 60 trains a day through here at all hours of the day and night.  Between the factories – with their machinery, trip hammers and forges – and the railroad – rumbling through and belching steam – this was a busy, noisy, smelly, unpleasant place.

"The reason why all of this was here, was this:

The Ranger raised the musket that he had been holding across his shoulder, and he shook it slightly.

"The Federal Government made these in the armory that stretched along the banks of the Potomac, just over there.  The armory is the largest employer in town, and the prosperity of the town depends upon the armory.  An armory is a factory where weapons are made.  The arsenal buildings were just over there, along the banks of the Shenandoah.  An arsenal is a warehouse where weapons are stored.

"In 1859, John Brown and his followers staged a raid on Harpers Ferry in the hopes of sparking an uprising among the slaves.  They made Harpers Ferry their target for the purpose of gathering weapons from the Federal arsenal to arm their supporters.  They failed.  Brown’s men were killed or captured, and Brown was executed after a highly publicized trial.  The raid and the trial heightened the tensions that already existed between the northern and southern states.

"In November of 1860, Abraham Lincoln, the Republican party candidate, was elected President of the United States.  The Republican Party was a new political party, united around its opposition to slavery.  Lincoln didn’t win the vote in any of the southern states.  The Democratic Party splintered during the election, and three different Democratic Party candidates ran for president.  Almost immediately after the election, the southern states started seceding from the Union.  South Carolina was first to go, and others followed.

"Come with me and find out what happened next.

The Ranger, having reshouldered his musket, turned to his right and walked off to an open lawn.  Flat stones, showing through the grass, outlined a large rectangle that easily contained about a dozen low benches.

"Lincoln took office in March of 1861.  In 1861 Harpers Ferry was a part of the state of Virginia.  This part of Virginia became the state of West Virginia and was admitted to the Union in 1863.  Virginia is a southern state, and it calls a convention to consider whether to secede from the Union like most of the other states have done.  On April 12 the Confederate forces on Charleston, South Carolina opened fire on Fort Sumter, an island fortress in the harbor manned by a small Federal garrison.  On April 14 the Fort surrendered.

"On April 18 Virginia voted to secede from the Union. Loyalties in Harpers Ferry were divided – some people felt loyalty to the state, but the livelihood of many people in the community was tied to the Federal armory. The news that Virginia had left the Union caused rioting here.

"After John Brown’s raid, the Federal government posted a contingent of 50 soldiers to protect the armory and the arsenal.  Immediately after Virginia seceded, there were rumors that hundreds or even thousands of Virginia militia men were on their way and would arrive the next day to seize the arsenal, which contained 15,000 rifles and muskets ready for use.  There was no way that the garrison of 50 could defend the armory against hundreds or thousands.  Under cover of darkness, the Federal soldiers filled a mattress cover with gunpowder and dragged it into the main arsenal building, which is where you are sitting, and the smaller arsenal, which is just over there.  The explosion set both buildings on fire, destroying the buildings and all the weapons stored in them.

"The noise of the explosion brought the towns people running, and regardless of their loyalties, they did what they could to put out the fire and keep it from spreading.  In the nineteenth century fire was a common enemy.  If a building wasn’t made entirely out of wood, it had a wooden roof.  Sparks from any blaze threatened everyone.

"They put out the fire.  The arsenals and all the finished weapons were destroyed, but the armory buildings along the Potomac River and all the machinery in them remained intact.  The rumors turned out to be essentially true.  A contingent of about 350 Virginia militia arrived the next day and seized the armory.

Next up: the Confederates assess the strategic situation at Harpers Ferry.