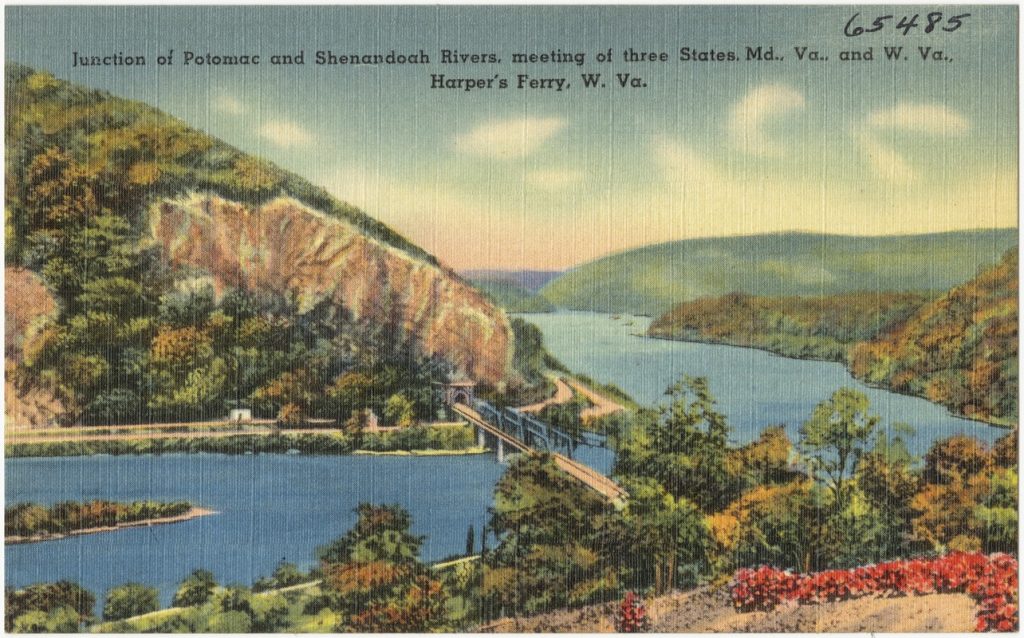 "Now, come with me, and let’s look at the strategic situation.

The Ranger turned again to his right and walked out to a point of land about 50 feet above where two rivers joined together and flowed as one off into the distance.  He turned to face his audience, who stood looking into the distance where the river flowed.  On the far side of both rivers, rocky hills rose up over a thousand feet.

"Down there to your left is the Potomac River, and to your right is the Shenandoah River, which flows into the Potomac.

"Upon leaving the Union, Virginia becomes a part of the Confederate States of America.  The Potomac River divides Virginia from Maryland.  Maryland remains in the Union and is a part of the United States of America.  From the point of view of Virginia, the Potomac River has just become an international boundary with a hostile neighbor, shots having already been fired.  Is this a good place for an armory?  No.

"Let’s think about this another way.

The Ranger pointed down into the Shenandoah River.

"Those boulders, where the Shenandoah flows into the Potomac, mark the northern end of the Shenandoah Valley, which runs southwest between two mountain ranges deep into Virginia.  An army moving through that Valley is essentially invisible to anyone outside of the Valley.  That is an invasion route into the South.

The Ranger pointed behind him to where the Potomac River disappeared into the folds of the landscape.

"You are looking east.  Sixty miles in that direction as the crow flies is the Federal capital.  They called it Washington City in those days.  For the armies of those times that distance is about three days’ march.  That is an invasion route to the northern capital.

"The Virginia government brought in Thomas J. Jackson, a professor of artillery at the Virginia Military Institute, and they asked him how they could make Harpers Ferry secure from invasion.  Jackson, the foremost authority on artillery of the day, knew that artillery on the highest point of land controls the surrounding countryside.  Harpers Ferry is surrounded by heights on three sides.  Bolivar Heights rises above the town behind where you are standing.  Loudon Heights rises up there …

he pointed up, across the Shenandoah …

"but the highest of the three …

he pointed up on the other side …

"is Maryland Heights, which rises across the Potomac.

Next up: the Thomas Jackson raid, the great train robbery, and the armory seized.