Part 3: With Hammer in Hand 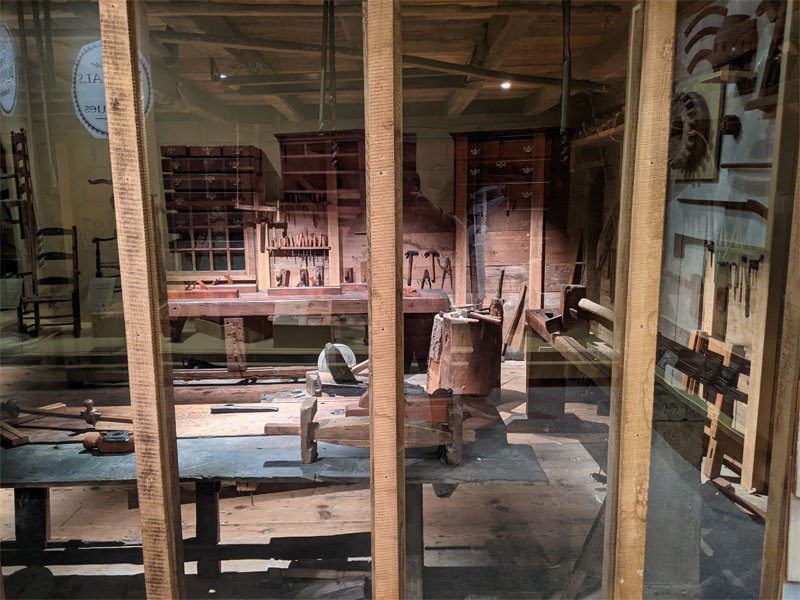 I undertook an informal course of reading to learn about the history and chemistry of black powder and the history and operation of machine tools, water wheels, water turbines and steam engines, almost anything I could lay my hands on concerning nineteenth century industry.  Winterthur was a further inspiration, not only for its collection of objects made and used in America up until about 1860 – including Argand lamps with their cylindrical wicks, handcrafted Pennsylvania rifles, and cast iron stoves and fire backs—some objects of beauty, some objects of utility, and some objects both beautiful and useful.  I found particular inspiration in the Dominy shops exhibit.  A definitive work about the Dominys, entitled With Hammer in Hand, was written by Charles Hummel, who was at the time a Winterthur curator.1 Three generations of the Dominy family were craftsmen who worked in wood and metal in East Hampton, Long Island, New York from about 1760 to about 1850.  The exhibit includes their carpentry shop and a shop they used for making clockworks and repairing watches, each with a full array of tools.  The carpentry shop had a hand powered lathe, and the clock shop had tiny machine tools for cutting gears.  One item in the carpentry shop puzzled me.  It was a wooden wheel about two and a half feet in diameter and about four inches high.  The center hole was octagonal.  The upper three inches of the outside edge of the wheel was tapered inward as though to form a truncated cone.  A series of squarish pegs arose from the tapered edge of the wheel.  I thought it might be a rack for drying the mittens of kindergarteners, but I couldn’t imagine why anyone would want such a massive object for such a trivial purpose when a laundry line and clothes pins would do a better job. 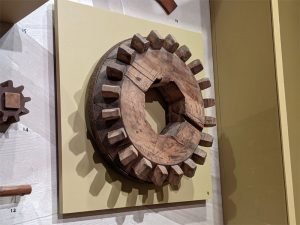 Then it hit me: it was a bevel gear, a device one might find in a flour mill for transferring and directing motion generated by a water wheel to the mill stones.  The gear was wooden because in the days when metal was comparatively expensive, wood was the preferred material for use in industry.  Water wheels were made out of wood, held together with bits of metal, and metal was used only for the parts that were subject to the most stress.  The beams that transmitted the power were wooden as were the gears that directed the power to the machinery.  A curator later verified my surmise.  He said that they included the gear in the carpentry shop as a nod to the fact that the Dominys also worked as millwrights.  A diorama at the Hagley Museum depicting the earliest gunpowder works showed them operating with wooden machinery.  I’d guess, however, that the Dominys reserved their finer tools for making furniture and used rougher implements for the millwrighting work. 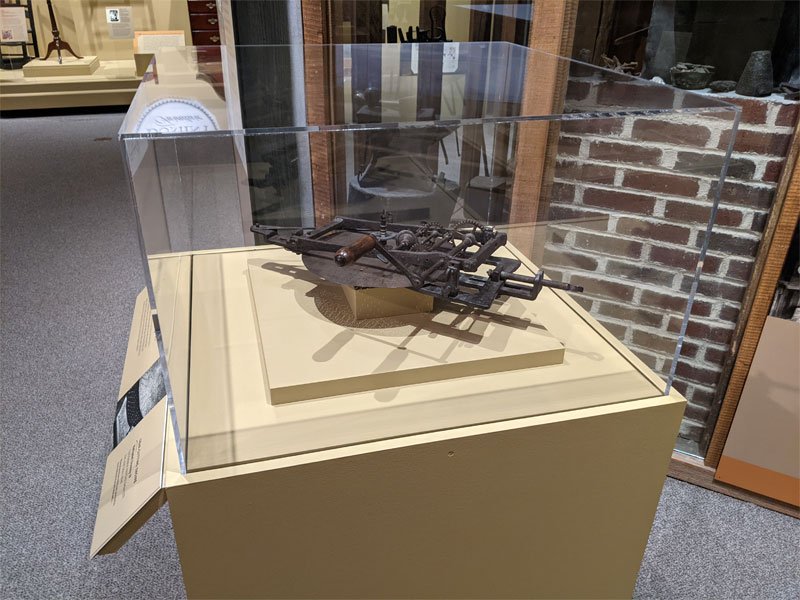 Winterthur recently refurbished the Dominy shops exhibit.  The basic configuration is the same, but the number of objects made by the Dominys has been increased.  The gear-cutting engine has been moved from the clock and watch shop and put on a pedestal under a clear case that permits it to be viewed from all sides.  A separate wall mounted case features various industrial objects that the Dominys made and used in their millwrighting and wheelwrighting businesses, including the bevel gear.  The museum’s signage calls it a “mill cog.”

Up next: finding the evolving battlefield and moving east to find the Western Front.